40,84
0,330 (0,81%)
Tempo Reale
Mercato Aperto
40,84
Shiba Inu Beats Out Cardano, Dogecoin On Top 10 Watch-Listed Tokens
08 Novembre 2021 - 06:00PM
NEWSBTC
Shiba Inu has not been doing very well recently in the market, but that has not stopped the meme coin from being a favorite in the market. Investors had poured into the coin following its rallying to a new all-time high in October and have since maintained support for it. SHIB had lost its footing at this high price, dragging it out of the crypto top 10. However, the meme coin remains one of the most popular crypto coins in the market. The watch-list on CoinMarketCap is a feature that allows investors to choose the assets they want to keep an eye on as the market evolves. The top watch-listed assets on this list usually do not fluctuate much. But Shiba Inu has shaken up things recently. SHIB not only made it into the top 10 but has beaten out some of its top rivals on the list. Shiba Inu (SHIB) Takes 3rd Place As Shiba Inu got kicked out of the top 10 cryptocurrencies by market cap, presently occupying 11th place, it has set up shop as a top contender in another top 10 list. For the top 10 most watch-listed coins on CoinMarketCap, SHIB made 3rd place on the list. It came behind Bitcoin and Ethereum which occupied 1st and 2nd positions respectively. Related Reading | How Bitcoin Has Performed Compared To Top Stocks Shiba Inu’s returns have made it a beloved crypto in the community, thus being 3rd place on this list does not come as a surprise. The highly volatile nature of dog-themed cryptocurrencies makes it so that investors have to be one step ahead if they wish to make the most profit out of their investments. Making watch-lists a valuable tool for investors. SHIB price suffers after ATH | Source: SHIBUSD on TradingView.com SHIB beat out its top rival Dogecoin and community favorite Cardano to place 3rd on this list. It clenched this position with a total of 1,702,000 watch-lists. Top coins Bitcoin and Ethereum had 2,612,000 and 2,123,000, while Dogecoin placed 7th with a total of 1,310,000 watch-lists. SHIB Ruling On Social Media Shiba Inu has now surpassed Ethereum on total Twitter followers. The total number of followers on the official Twitter account of SHIB hit 1.8 million on Sunday, surpassing Ethereum which sat at 1.7 million at that time. SHIB is an ERC-20 token that is built on the Ethereum blockchain and has been one of the most successful tokens on the blockchain thus far. The meme coin has continued its social media domination after the token was said to be the most talked-about cryptocurrency on social media in October following its rally to a new all-time high. This is a testament to how fast the community is growing. Related Reading | Is Cardano Fighting A Losing Battle Against Solana? Despite this though, the price has not positively reacted to all of the support. After dropping from its ATH at the end of October, there is no sign of improvement in the altcoin. The digital asset had dropped close to $0.00004 on Thursday but had since recovered back up. However, the meme coin has stagnated around $0.00005 in the days following that. Featured image from Nairametrics, chart from TradingView.com
Grafico Azioni Solana (COIN:SOLUSD)
Storico
Da Lug 2022 a Ago 2022 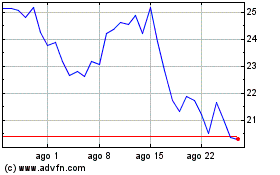 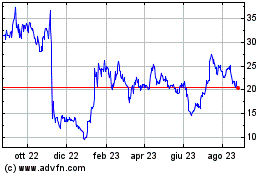 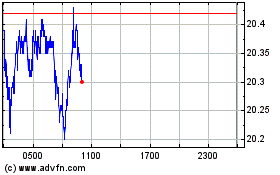