7,10
0,00 (0,00%)
Tempo Reale
Mercato Aperto
7,10
Tron Performance Last Month Was Impressive, But Can TRX Do Better This November?
03 Novembre 2022 - 11:16AM
NEWSBTC
Tron, a decentralized, open-source blockchain-based operating system with smart contract functionality, recently released its monthly report for the month of October. There, the company behind the cryptocurrency TRX highlighted some of the developments that gave its ever-supportive community plenty of reasons to celebrate. Among those included in the report was Tron becoming the first national blockchain of Dominica which meant digital currencies under its umbrella such as TRX, BTT, JST, NFT, USDD, USDT and TUSD were given permission to be used as medium of exchange within the country. Justin Sun, the founder of the decentralized network, has also been invited by world-leading cryptocurrency trading exchange Huobi Global to be part of its advisory board. Meanwhile, Tron Grand Hackathon, returned for its third season, providing another avenue for blockchain enthusiasts to showcase their ideas and be noticed by crypto experts. Related Reading: Rug Pull: 97% Of Crypto Projects On Uniswap Were Scams, Study Reveals TRX Performs Well In October TRX managed to offset some of its loses back in September when it managed to pump its prices last month, peaking at $0.064 on October 15. Among those possible reasons for the impressive performance of the Tron crypto was the notable influx of 4.45 million new users that joined the network’s ecosystem. This resulted in a major upswing in number of transactions facilitated by the blockchain which reached a tally of 186 million by the end of the month. The altcoin, however, seemed to have lost some of its momentum as it is currently in a declining trend over the last 24 hours according to tracking from Coingecko. At press time, TRX is trading at $0.062 and is now down by 2% over the last seven days. Despite the price dip, the asset is still on the green zone as far its biweekly and monthly charts are concerned. It is the 15th ranked cryptocurrency in terms of market capitalization, having an overall valuation of $5.728 billion. Price Forecast For TRX Although the trading price Tron crypto is currently experiencing a downward movement, the network’s community can expect bullish rally from the asset, at least according to forecasts from Coincodex. Over the next five days, TRX is expected to slightly increase its current spot price by almost 2% to change hands at $0.063. Meanwhile, the digital coin is expected to retain its upward momentum for the next 30 days and is predicted to trade around $0.067. It is important to note, however, that these forecasts are not set in stone as TRX, just like any other cryptocurrency, is always at the mercy of the volatile nature of the crypto market. Related Reading: Crypto Exchange Deribit Loses $28 Million To Cybercriminals TRX total market cap at $5.77 billion on the daily chart | Featured image from Zipmex, Chart: TradingView.com Disclaimer: The analysis represents the author's personal understanding of the crypto market and should not be construed as investment advice.
Grafico Azioni Uniswap (COIN:UNIUSD)
Storico
Da Gen 2023 a Feb 2023 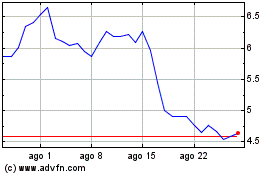 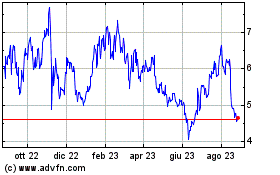 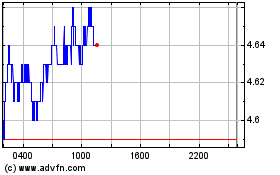