Kering wants to see its second-biggest brand Yves Saint Laurent reach 5 billion euros ($5.36 billion) in sales and boost its profitability in the medium term by growing in underpenetrated consumer markets and focusing on retail over wholesale, the French luxury-goods group said at a capital-markets event Wednesday.

The ambition entails close to a doubling of the sales the brand made in 2021, namely EUR2.52 billion of the group's total EUR17.66 billion. Main brand Gucci contributes more than half of Kering's total revenue and profit.

Kering also aims for YSL to reach and sustain an operating margin of 33% in the medium term, it said. Last year, the group notched a margin of 28.2%, a record level though still some way short of Gucci's 38.2% margin.

The next milestones in YSL's progress will be passing EUR3 billion in sales and attaining a 30% margin, Kering said.

In order to reach these goals, the brand will consolidate its existing demographics, with a focus on younger consumers in the millennial and Gen-Z generations, while appealing to others, Kering said. It will also grow its business with local consumers, who make up a far bigger proportion of sales than tourists, the group said.

YSL will consolidate its leading product category, leather goods, while also looking to grow in shoes and ready-to-wear and by attracting more male consumers, who in 2021 made up only around a quarter of the brand's customers, Kering said.

The brand will also look to further rationalize its wholesale sales in favor of retail, following in the footsteps of Gucci. Last year, YSL started streamlining wholesale, which grew only 6% from the prepandemic period, compared with a 35% rise in sales from directly operated stores. Omnichannel expansion, including growth in online, will be part of this strategy, Kering said.

Kering has previously underscored the potential of YSL, which was probably the world's fastest-growing luxury brand last year, Chief Executive Francois-Henri Pinault said following 2021 results earlier this year. Analysts at the time noted the brand was Kering's star performer over the year, and has much potential in China, as well as in pricing power and in the development of its high-end offer. 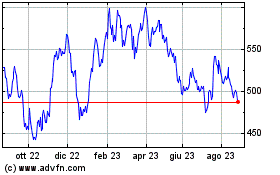