US Dollar vs CAD Notizie

The U.S. dollar advanced against its most major counterparts in the European session on Monday, on expectations of aggressive interest rate hikes from the Federal Reserve and as disappointing economic data from China sparked recession fears.

China's retail sales and industrial output came in well below the expectations in July, signalling a fragile recovery in the world's second-largest economy.

The Fed minutes, which will be released on Wednesday, could offer more clues about the pace of rate hikes in the future.

"I'd like to see a period of sustained inflation under control, and until we do that I think we are just going to have to move rates into restrictive territory," Barkin added.

Fed funds futures show a 46.5 percent possibility of a 75 basis-point rate hike at the September meeting and a 53.5 percent chance of a 50 basis-point move.

The greenback, however, retreated against the yen and was trading at 133.00. On the downside, 126.00 is likely seen as its next support level.

Looking ahead, Canada manufacturing and wholesale sales for June, as well as U.S. NAHB housing market index and New York Fed's empire manufacturing survey for August will be featured in the New York session. 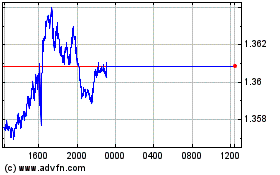