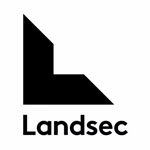 The FTSE 100 closed up 0.3% on Wednesday after the Bank of England said it would buy U.K. government bonds with long maturities "on whatever scale is necessary" amid the pound's plummet. "The Bank of England's u-turn (at least for now) on quantitative easing has given embattled buyers a reason to step back into the market, IG's chief market analyst Chris Beauchamp says. The BOE's intervention is being taken as a good sign, especially when compared with the bank's inaction earlier in the week, Beauchamp says. The U.K. index's top three fallers were Land Securities Group PLC, Segro PLC and British Land Co.

Burberry Group PLC said that Chief Creative Officer Riccardo Tisci will step down at the end of September, to be replaced by Daniel Lee.

Spirax-Sarco Engineering PLC said Wednesday that it has entered into a definitive agreement to buy Durex International Corp., a U.S.-based specialist in custom electric thermal products.

Avingtrans PLC said Wednesday that its pretax profit and revenue rose in fiscal 2022, thanks to organic growth in two divisions, and that the war in Ukraine and its effect on global inflation pose the biggest uncertainties.

DX (Group) PLC said Wednesday that pretax profit for the first half of fiscal 2022 rose after it booked progress at DX Freight and strong central cost control.

Amigo Holdings PLC said Wednesday that it is performing in line with expectations, and that it plans to hold a capital raising of around 40 million pounds ($42.9 million), including a business-program-mandated share issue.

Boohoo Group PLC reported on Wednesday a swing to pretax loss for the first half of fiscal 2023 and downgraded its guidance for the full-year driven by the impact of inflationary pressures and lower-than-expected sales.

Gama Aviation PLC said Wednesday that it expects margins in the second half to be hurt by inflationary cost pressures and supply-chain challenges as it reported a narrowed first-half pretax loss on higher revenue.

DP Poland PLC said Wednesday that its pretax loss widened despite a rise in revenue, due to increased direct costs from inflationary pressures.

Everyman Media Group PLC said Wednesday that its pretax loss for the first half of 2022 narrowed following healthy admissions growth and robust spending per customer.

XP Factory PLC said Wednesday that its pretax loss for the first half of 2022 widened as costs increased, but that revenue jumped due to the strong performance of its Escape Hunt and Boom Battle Bar brands.

Diversified Energy Co. said Wednesday that it has acquired certain upstream assets and related facilities in Oklahoma and Texas from ConocoPhillips Co. for $240 million before adjustments.

Roebuck Food Group PLC said Wednesday that it swung to a first-half pretax profit on continuing activities and that revenue rose, and that it was still carrying out a strategic review of its businesses.

Shares of CML Microsystems PLC rose 13% on Wednesday after the company said it expects to report profit for the first half of the fiscal year that is significantly above management's previous expectations after a strong start to the year, and to beat market forecasts for the year as a whole.

7Digital Group PLC said Wednesday that its pretax loss for the first half of 2022 narrowed after it secured five new licensing customers and three contract expansions or extensions.

Shares in Glantus Holdings PLC fell 61% in early trade Wednesday after it warned full-year revenue and earnings before interest, taxes, depreciation and amortization are seen to be significantly below market expectations.

Non-Standard Finance PLC shares more than halved on Wednesday after the company reported a widened pretax loss for the first half of 2022 and said it is pursuing a capital raise to redress liabilities.

EMIS Group PLC said Wednesday that its first-half pretax profit slipped despite a rise in revenue, primarily on one-off costs related to its technology transformation program.

0918 GMT - Royal Mail looks threatened by further industrial action in the critical run up to the festive season and the all-important Black Friday/Cyber Monday period and this could cost it around GBP19 million, Interactive Investor's head of investment Victoria Scholar says in a note. "The dispute is dragging on and on, having kicked off early this summer and will have a negative impact on its next set of financial results in November," she says. The postal service and courier company is also dealing with rising costs amid inflation and the long-term structural decline in letter volumes. Shares trade down 8% at 178.45 pence. (kyle.morris@dowjones.com)

0914 GMT - Boohoo reported a disappointing first half due to a weakening in consumer demand, but its key initiatives to support its long-term aspirations are still progressing, Jefferies analysts Andrew Wade and Grace Gilberg say in a note. The online fashion retailer continues to invest in strategic projects--with Sheffield's logistics automation going live and the U.S. warehouse construction on track--and a wholesale new sales portal, the analysts say. "Thinking about the bigger picture, Boohoo remains a far larger business than it was pre-pandemic and, with over GBP300M of financing headroom to weather the challenges, management continues to focus on the longer term opportunity," they say. (michael.susin@wsj.com)

0847 GMT - Although drinks company A.G. Barr reported a strong first half for fiscal 2023, cost inflation and weak consumer sentiment has led to margin guidance for the year of around 14%, down from 14.9% in fiscal 2022, Liberum analyst Wayne Brown says in a note. The company hasn't provided any profit guidance for fiscal 2024 but Liberum expects a further margin decline to 12.4% for the year from 13.9% in fiscal 2023's forecasts. "AG Barr remains one of the more resilient names in the current climate, defensive both against a consumer downturn and with brand power to work through inflationary times," Brown says. Liberum cuts its rating on the stock to hold from buy, and lowers its target price to 525 pence from 655 pence. Shares are down 5% at 467 pence. (anthony.orunagoriainoff@dowjones.com) 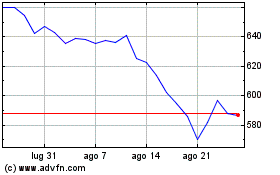 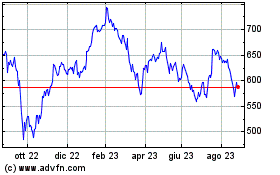 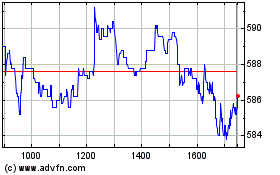