(a) Service charge income corresponds to service charges invoiced to tenants and cover general maintenance and repairs, security, heating, cooling, lighting and cleaning of common areas. Service charge income is included in total revenues (IFRS 15). The figures for Q1 2021 were restated accordingly for a total amount of €62.1 million.

Over the first quarter of 2022, gross rental income generated by shopping centers reached €272.9 million on a total share basis, up 9.7% on a like-for-like basis.Management and development fees amounted to €18.3 million, up 24.1%, mainly due to the resumption of development projects.Overall, total revenues for the three-month period ended March 31, 2022 amounted to €359.5 million, a 4.7% increase compared to the same period last year.Net rental income generated by shopping centers amounted to €217.8 million, up 88.3% on a like-for-like basis, reflecting the fact that the first quarter of 2021 was adversely affected by store closures lasting an average of 1.5 months.Based on actual rent collection figures (93.1%, as of April 27), the rent collection rate for the quarter is expected to reach 96.7%.

In a similar vein to the rebound observed in the second half of 2021, leasing activity returned to normal over the quarter with 372 leases signed, more than double the number concluded in the first quarter of 2021. Reversion on renewals and relettings was virtually flat (-0.3%) over the period. Occupancy rate is stable at 94.7% compared to December 31, 2021.Klépierre continued to cement its longstanding partnerships with key accounts, notably through deals with Inditex for the opening of two new enlarged and refurbished Pull & Bear stores at Plenilunio (Madrid, Spain) and Aqua Portimão (Portimão, Portugal), which also bolstered its fashion offering with the latest Stradivarius format. Highlights for the period also included two important deals with Nike for the opening of its first stores in our Swedish (Emporia) and Danish (Bruun’s) malls. In addition, Rituals is set to join Poznan Plaza (Poland) in September, while Calzedonia selected Blagnac (Toulouse, France) and Sadyba Best Mall (Warsaw, Poland) for its latest Tezenis and Intimissimi boutiques. Meanwhile, shoe retailer Group Deichmann continued to roll out its concepts in Europe with the opening of Deichmann stores at Belle Epine (Paris, France) and Marieberg (Örebro, Sweden). Skechers also continued its expansion with the opening of a new store at Porta di Roma (Roma, Italy). In addition, the Group seized opportunities to develop on-trend concepts through deals with Xiaomi, Danish brand Flying Tiger Copenhagen and value retailer Normal, while Chinese lifestyle brand Miniso signed up to open its first store in Klépierre’s French portfolio at Créteil Soleil (Paris, France). Lastly, the Group concluded a deal with Vans for two new stores in France (Jaude in Clermont-Ferrand and Grand Place in Grenoble), while hip eyewear specialist Jimmy Fairly is set to unveil a new flagship at Blagnac in June.

Due to store closure, comparison with Q1 2021 is irrelevant. In the absence of significant seasonality, we compare operational KPIs of Q1 2022 with the undisturbed period of 2021 (June to December).Over the first quarter of 2022, retailer sales were resilient at 95% of 2021 while footfall were at the same level. Retailer sales in January 2022 were hindered by certain ongoing restrictions and historically high contaminations levels. In February and March 2022, retailer sales are in line (98%) with 2021.By geography, Scandinavia once again led the way, with retailer sales peaking in February. Conversely, the recovery tended to be slower in France and Italy. The Netherlands & Germany were also impacted by the Dutch lockdown through mid-January and the German “2G” law limiting access to certain activities.On a segment basis, household equipment again outperformed the Group average, followed by culture, gifts & leisure and health & beauty. The fashion segment was buffeted by headwinds in January due to the Omicron variant but rebounded in February. Food & beverage registered similar trends in January due to restrictions on restaurants and accelerated in February.

The Annual General Meeting, which took place on April 26, 2022, approved a cash distribution in respect of fiscal year 2021 of €1.70 per share. The distribution will take the form of an equity repayment(6) paid in a single installment on May 16, 2022.

In the context of the war in Ukraine and the international sanctions against Russia, Klépierre regularly monitors the impact of the situation on its business and the broader economy. The Group operates neither in Ukraine nor in Russia and does not expect that inflationary pressures created by the situation will have a material impact on its cost structure or on the costs of its committed development projects. Long-lasting inflation could potentially affect consumer spending for certain goods or services provided by tenants. Based on the current macroeconomic projections, the Group has however not identified the need to revise its financial forecasts for 2022.Accordingly, Klépierre confirms its 2022 guidance as stated in its February 16, 2022 earnings release and expects to generate net current cash flow per share(7) of between €2.30 and €2.35 in 2022.

(a) Service charge income is included in total revenues. The figures for Q1 2021 were restated accordingly for a total amount of €62.1 million on a Total share basis and of €52.5 million on a Group share basis (IFRS 15).

Klépierre is the European leader in shopping malls, combining property development and asset management skills. The Company’s portfolio is valued at €20.7 billion at December 31, 2021, and comprises large shopping centers in more than 10 countries in Continental Europe which together host hundreds of millions of visitors per year. Klépierre holds a controlling stake in Steen & Strøm (56.1%), Scandinavia’s number one shopping center owner and manager. Klépierre is a French REIT (SIIC) listed on Euronext Paris and is included in the CAC Next 20 and EPRA Euro Zone Indexes. It is also included in ethical indexes, such as Euronext CAC 40 ESG, MSCI Europe ESG Leaders, FTSE4Good, Euronext Vigeo Europe 120, and features in CDP’s “A-list”. These distinctions underscore the Group’s commitment to a proactive sustainable development policy and its global leadership in the fight against climate change. For more information, please visit the newsroom on our website: www.klepierre.com

This press release is available on the Klépierre website:www.klepierre.com

(1)  The data disclosed in this release, including those set out in the appendices, have not been audited.(2)        Change is on a same-store basis, excluding the impact of asset sales and acquisitions.

(3)  Based on end-December 2021 portfolio valuations.(4)  Calculated as the ratio of fixed-rate debt (after hedging) to gross borrowings expressed as a percentage.(5)  The liquidity position represents the total financial resources available to a company. This indicator is therefore equal to the sum of cash at hand at the end of the period (€0.4 billion), committed and unused revolving credit facilities (€1.7 billion, net of commercial paper) and uncommitted credit facilities (€0.4 billion).(6)  The distribution of €1.70 per share will take the form of an equity repayment within the meaning of paragraph 1 of Article 112 of the French Tax Code.(7)  Excluding the impact of amortizing Covid-19 rent concessions (IFRS 16). 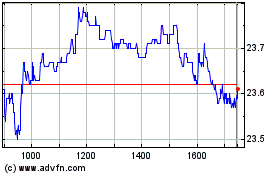